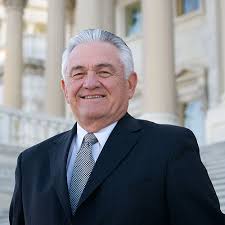 Former Congressman Bill Brewster serves as Chairman of Capitol Hill Consulting Group and is the United States Head of Delegation for the International Council for Game and Wildlife Conservation.

As the first and only practicing pharmacist to serve in the U.S. Congress in the last 30 years, Congressman Brewster made significant contributions to the health care policy debate of the 1990âs.  His background in health care allowed him to pave the way for common sense reforms in the nationâs health care system.

Throughout Congressman Brewsterâs service in Congress, he used his innate skill of coalition building to bring the two political parties, the Administration and private sector together on a host of legislative and public policy initiatives. The results of Congressman Brewsterâs strong coalition and partnering skills are still evident in Congress today.  In 1994, he formed the Congressional Oil and Gas Forum, and served as its first Chairman.  In addition, Congressman Brewster was Chairman of the Congressional Sportsmanâs Caucus and was co-founder of the Blue Dog Coalition (an influential group of pro-business Democrat Members of Congress).

A true leader in building and maintaining strong bipartisan coalitions in Congress, Congressman Brewster was instrumental in organizing the first congressional oil and gas meeting with a sitting U.S. President.  The Congressional Oil and Gas Forum included more than 80 U.S. Senators and Representatives all of whom met with President Clinton in 1994 to discuss the plight of the domestic oil and gas producers.

On today’s episode of Hunting Matters, Joe speaks with Bill Brewster about how a pharmacist become a U.S. Congressman and more about his political career. In addition to being a former U.S. Congressman and a pharmacist, Bill has been a cattle ranch owner, owner of a car dealership and owner of a real estate company, we learn all about this and how his love of the outdoors began. Listeners are given insight into how decisions are made in Washington, which affect our U.S. wildlife policy. Bill talks about serving as Chairman of the Congressional Sportsmanâs Caucus and the importance of this caucus. He currently is serving as the Unites States Head of Delegation, International Council for Game and Wildlife Conservation, also known as the CIC. What is the International Council for Game and Wildlife Conservation, and why should hunters in the U.S. care about the CIC. Tune in Saturday morning at 6am CST to learn all about Bill Brewster!