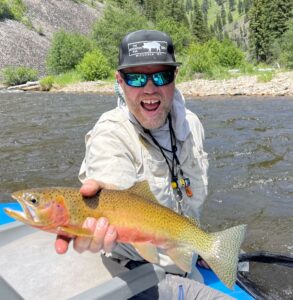 Land Tawney is president/CEO of Backcountry Hunters & Anglers, a North American membership-conservation organization based in Missoula, Montana. BHA is dedicated to serving as the voice for our wild public lands, waters, and wildlife.

As BHA president/CEO since 2013, Tawney has overseen the expansion of the organization from 1000 members and a handful of chapters to nearly 30,000 members and chapters that cover 48 states and Washington, D.C., two Canadian provinces, and one territory. Tawney works every day with a talented staff and 700-plus volunteer leaders to make sure all North Americans have access to public lands and wares and the fish and wildlife habitat when they get there.

Tawney was raised in Montana, where he hunted and fished from an early age. He earned a PHD in âPost Hole Diggingâ on the family spread and a bachelor’s degree in wildlife biology from the University of Montana in 2000. His conservation career now spans two decades. Prior to working at Backcountry Hunters & Anglers, Tawney worked for other conservation organizations including the National Wildlife Federation and the Theodore Roosevelt Conservation Partnership. He lives in Montana with his wife Glenna, two kids (Cidney-14) and (Colin-11) and five-year-old black lab Tule.