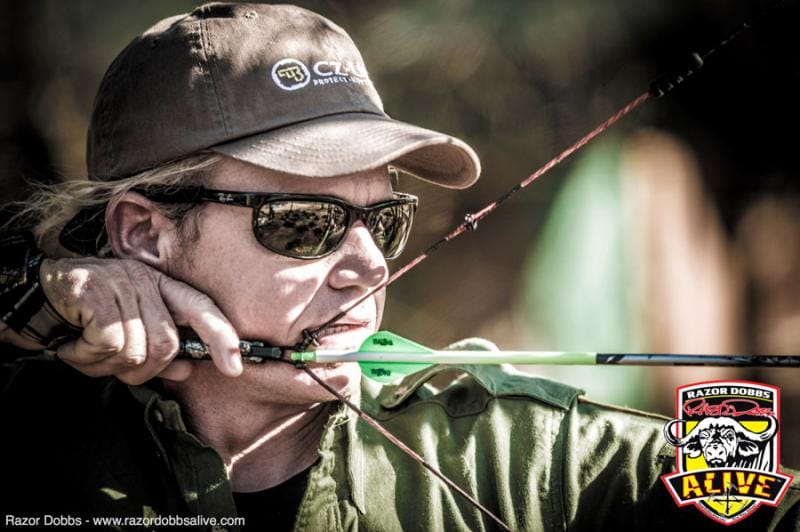 Razor Dobbs is considered one of the most passionate hunters on television. The blood that runs through the veins of hunter Razor Dobbs is full of vibrant emotion and intense passion for the dirt, thorns, tusks and antlers that he relentlessly pursues on a daily basis. A survivor of a wild boar attack and a nearly fatal elephant charge, he lives the highs and perils of hunting that he dreamed about when he was a kid. âWere not walking on a groomed golf course here,â says Razor, âEvery hunt is a potential live wire.â

Razor is recognized for being one of the most talented pistol hunters on the planet. The book, The Custom 1911, published by Gun Digest, states that Razor is a âHandgun Hunting Sensationâ due to his 20 years of successfully taking a huge number of game including being the first person to kill an African Cape Buffalo with a 10mm auto pistol (Razor has killed two Cape buffalo with the 10mm auto pistol). Razor has taken more big game with the 10mm auto pistol than anyone. Over the past 25 years of hunting with the 10mm auto, Razor has successfully hunted desert mule deer, elk, whitetail, Cape buffalo, nilgai antelope, zebra, hogs, turkey, waterbuck, wildebeest, red lechwe, gemsbok, springbok, and many other species.

Razorâs award winning television series âRazor Dobbs Aliveâ is in itâs eighth season. Razorâs passion for hunting and television started long ago. Razor grew up hunting at his grandparents ranch in the Texas Hill Country. In college he produced and starred in Razor Dobbs Outdoors Alive and hosted hunting radio shows on alternative rock radio KTXT at Texas Tech University. The year following graduation from Texas Tech, Razor was set on moving to Hollywood to attend stunt school and study acting. âIt was going to be a crazy jump to move to LA, but I was willing to go for it,â says Razor. âThen my phone rang. It was Ted Nugent.â Ted asked Razor to come work for him in Michigan. âThat call probably saved my life,â sayâs Razor.