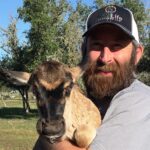 In 2011, Brian began investing in the exotic wildlife industry. As a result, he co-founded Wildlife Partners in April of 2016. As an entrepreneur, hunter and conservationist, his love for wildlife has led Brian to create an innovative model that marries wildlife conservation with capitalism. Wildlife Partners is today the largest breeder of exotic wildlife in the United States. The company has amassed more than 10,000 acres and is breeding 60 species with more than 3000 animals.