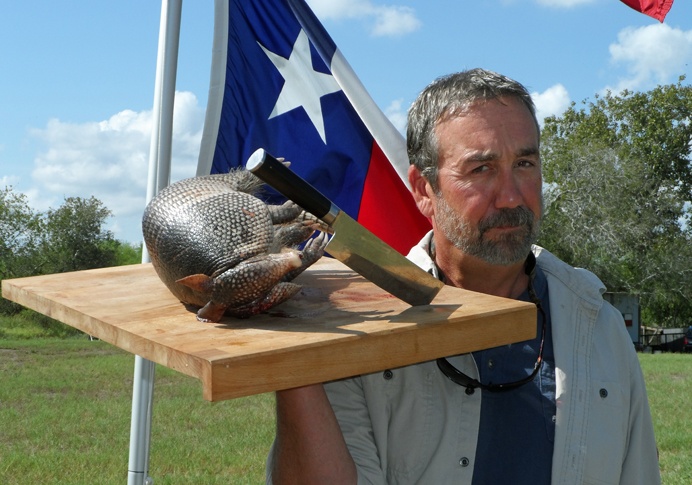 Scott Leysath, better known as âThe Sporting Chef,â has spent a lifetime developing his own brand of fish and game cooking mastery. As someone whose passion and profession are one in the same, Chef Leysath is undoubtedly among the best in the business. Heâs a âregularâ guy, not a classically trained chef, who sincerely wants anything with fur, fins and feathers taste as good as it gets.

Leysath cut his culinary teeth in the food and beverage industry. From bouncer to vice-president, he worked his way up the corporate ladder of a 34-unit Western U.S. chain before starting his own restaurant co-venture near Sacramento, California. His menu included a variety of fish and game. The restaurant hosted fish and game feeds, inviting customers to sample locally harvested deer, waterfowl, upland game and fish. His catering company also prepared banquet meals for Northern California sporting groups like Ducks Unlimited and California Waterfowl Association.

Someone took notice of Leysathâs engaging style of sharing his cooking skills and invited him to work on both sides of the camera on HGTVâs âHome Grown Cooking with Paul James.â He spent the next few years developing over 180 show themes as well as appearing as a frequent guest. In 2002, he launched his first TV show, the original âSporting Chefâ and eventually joined forces with veteran outdoor host, Donny McElvoy, on the âHuntFishCookâ show on Sportsman Channel. January 2014 marked the revival of âThe Sporting Chefâ show, but with a very different format that includes a broad range of pro chefs, lodge cooks and others who share their tips on how to prepare fish and game as well as general knowledge topics for outdoor enthusiasts. The show has been called, âthe fastest half-hour on outdoor televisionâ with quick segments that range from one to three minutes long. If you walk away from your TV during âThe Sporting Chefâ, youâre going to miss something of interest.

Scott is also the host and producer of the Dead Meat TV show on Outdoor and Sportsman channels. The show features less sought-after fish and game and the people who hunt, fish, trap, spear and catch them. Says Leysath, âItâs as much about the people and cultures as it is about the food. Who knew that armadillo tastes like pork? And that they can transmit leprosy to humans?â In 2021, Leysathâs Sporting Chef Productions and partner 4Mile Post Productions launched The Fishmonger show on Outdoor Channel. Itâs about the challenges and lifestyles of the American commercial fishing industry.

Scott Leysath is not a âfoodieâ who is on top of the latest food trend. His goal is not to out-chef anyone, but rather to inspire home cooks with simple solutions to everyday fish and game cooking challenges. In his latest cookbook, âThe Sporting Chefâs Better Venison Recipes,â he writes âRecipes that are simple to prepare, donât require a long list of obscure ingredients and, most important, taste really good will be in use long after herbal foams have evaporated. Molecular gastronomy is interesting, but Iâd rather go fishing.â

Leysath travels the globe, making personal appearances at outdoor shows, trade shows and corporate events. He entertains audiences with what the calls âshort attention span cookingâ, throwing fish and game into a skillet in blazing speed. He has been the cooking columnist for the Ducks Unlimited Magazine since 2007 and Hunterâs Horn since 2016.  He has also contributed to several other outdoor publications for over 20 years.  He lives in Northern California with his wife and two setters. Heâs an avid hunter and angler who prefers a homecooked meal over high-dollar fine dining fare.